Sometime back around February, I stumbled upon this Podcast Episode on Rust during one of my morning commutes to work, and was sold on learning Rust.

Why? At the time, I was a little burned out by React and JavaScript/TypeScript (what I used for work), so I figured learning a second language and more specifically, my first low-level language, was worth a shot.

The following weeks would feel like a rollercoaster in terms of my learning in Rust, computers, programming, and many other things like general motivation and self doubt. 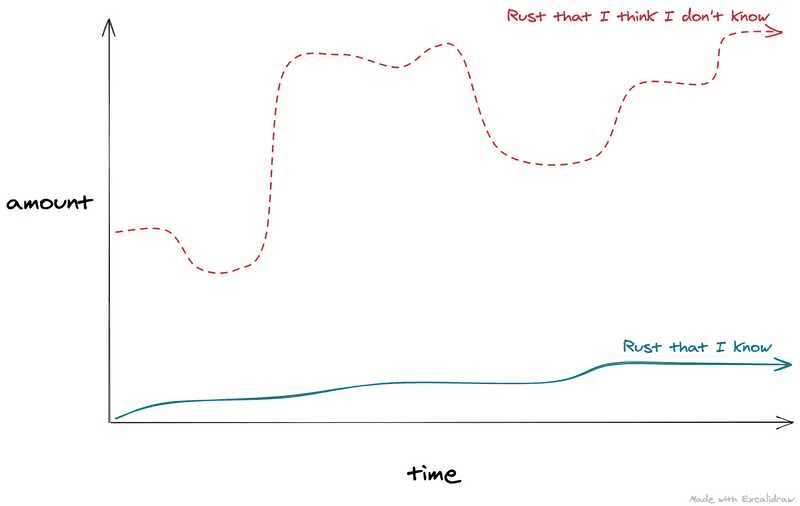 ℹ️ Note to self: Write a post on learning processes and methods (Rustlings, Leetcode, Exercism, side projects)

After several weeks of dabbling with Rust “crates” (how Rust packages are referred to) like Actix (web framework), Diesel (ORM), and even making a MacOS system notification CLI tool, I arrived a point where I felt like I was not making anything fun.

Then, two days ago I came up with a miraculously fun idea, to recreate Medium’s “claps” feature.

I had set some constraits for myself:

Going into this project, I had a vague idea of all the the moving parts, sort of a like a freshly opened Lego kit. It wasn’t until after I actually finished the feature that I went backwards a step to create this systems diagram.

Looking back, diagramming first would’ve been ideal but figuring things out on the fly also made this fun in an explorative way… I guess like building a Lego kit without the instruction manual 😮. 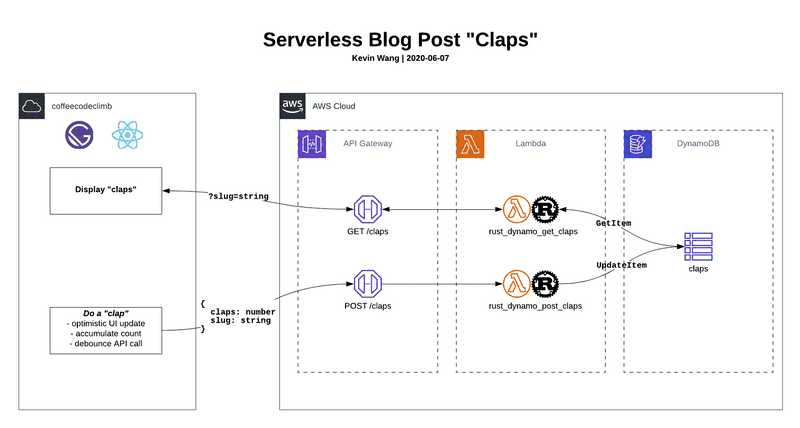 I needed to use these crates to handle some key functionality of this feature.

Serde is a framework for serializing and deserializing Rust data structures efficiently and generically.

This package makes it easy to run AWS Lambda Functions written in Rust.

This came with some crucial documentation for getting a custom Rust runtime into AWS Lambda. Currently, AWS only officially supports Node.js, Python, Ruby, Java, and Go runtimes.

AKA: hours of my life lost to the not caring to read and understand fundamental concepts thoroughly.

In local development in VSCode, the Rust compiler helped catch so many type errors, and essentially prevented me from uploading Lambda function code that wouldn’t run. This was a huge plus thoroughout the development cycle.

I hadn’t (and still haven’t) figured out how to spin up a local Docker Rust runtime, so I ended up uploading new function code to Lambda and using the API Gateway test console, every time I needed to see the output of my Lambda execution code. 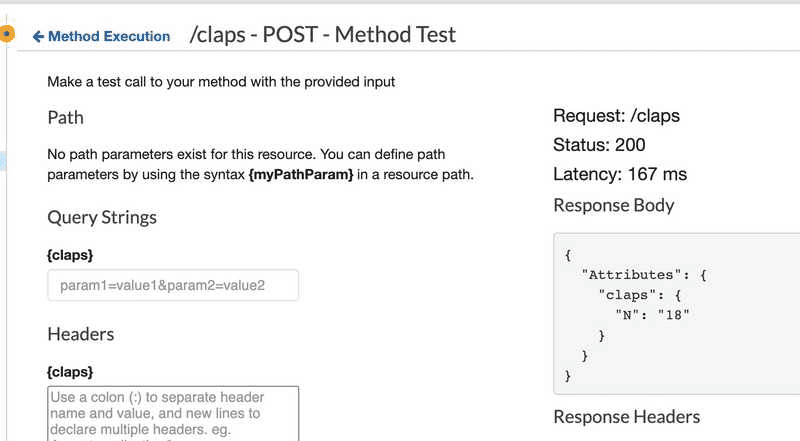 I think I lost about 18 hours to this - Saturday 8am to Sunday 2am. Initially, an API response error looked like a CORS issue (missing Access-Control-Allow-Origin header). This was only happening for a POST request, and not a GET request. Additionally I was definitely returning that header from Lambda code, so the problem must have been something else. I even did a sanity check by swapping out my Rust lambda function with a nearly identical Node.js function. No error. Ok…

I eventually narrowed it down to I was providing type annotations that pleased the compiler, but didn’t actually represent incoming data.

String to byte vector to struct

Confusing long story short, this is how you deserialize a JSON String into a typed Rust struct.

Figuring this out resolved my unexpected errors when sending POST requests to the endpoint from my client-side code. GET requests didn’t have this issue since there was no JSON string payload to potentially deserialize incorrectly.

At around Sunday morning at 2am, I got all my backend code to work (wow, a whole TWO functions 🤣😐)… I fist pumped the air in the dark, and went to bed.

I spent the next morning hooking up the client, or this blog (so meta!) to my Serverless, Rust Lambda Function powered API Gateway.

… and getting carried away with CSS.

Spin up a local Docker container that simulates the AWS Rust lambda runtime.

Have that successfully interface with another local DynamoDB docker container.

Get into the habit of actually proofreading these posts.